Children love to be told stories but it’s good for them to make up stories too. The stories don’t need to be written down. They can be recorded on a phone or iPad but it’s not necessary unless you or your child would like this. It the telling and te creative thinking and the ordering of thoughts that is important.

So how do you start?

Well there are lots of ways of initiating a story telling session but here is one way which can be used for children from two to ten. 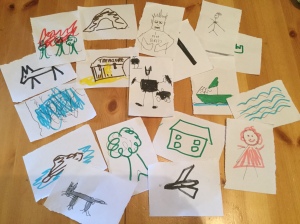 First ask the children to draw some pictures on small pieces of paper. The younger the children, the fewer pictures. For children under six I suggest two people, two animals,a super hero, and a monster. Then you need a few places ( an island, a house, a wood, and the sea always work well). Then a few objects that fit in with your places. Maybe a boat, a plane, a treasure chest and a cave) These pictures can be changed as children become familiar with them.

For tinies and for first time players, place all the pictures face up on the table.

Someone starts by picking up any picture and saying a sentence to start the story. It’s a good idea to have a few ‘Story Starters’ like:

The first child ( or an adult can start) May pick up a picture of a boy and say “Once upon a time there was a boy called Tim.”

Then the next child chooses a picture and carries on the storyline , ” Tim lived in a house deep in the woods.”

This continues until all the cards are used or someone can’t carry on the story. In that case they pick up the card saying ‘ The End’ and finish the story with a suitable sentence.

Once upon a time there was a princess called Sally.

Sally lived in a green house.

The house was in the woods.

One day there was a fire in the wood.

Spider-Man flew in and rescued Sally.

He took Sally to the beach

They found a boat

And sailed off to a desert island.

And lived happily ever after.

As children became familiar with the game it can be made more difficult by having the cards face down on the table.

This can also be used as a ‘CIRCLE TIME’ activity with a group of children sat in a circle. No pictures. One child sets the scene…. the kind of story it will be ….by starting with a particular story starter and then it goes round the circle. No one is forced to supply a sentence. If someone can’t think of one then it passes to the next child in the circle. To help an object or toy is passed around. Only the person with the toy can speak. If they don’t want to they pass the object to the next child.

We call this activity a ‘ Circle story’.